What an IMF Program Means to the Government of Ghana

What an IMF Program Means to the Government of Ghana On Friday July 1, 2022, the president of Ghana authorised the finance minister Ken Ofori-Atta to commence formal engagement with the International Monetary Fund (IMF), inviting the Fund to support an economic program put together by the Government of Ghana.

We, at Tesah Capital, expect the government to request for an Extended Credit Facility (ECF) arrangement similar to the 2015 program. The ECF is a lending arrangement that provides sustained program engagement over the medium- to long-term in case of a protracted balance of payments problems. The approved 2015 program was a three-year arrangement for about USD 955.2 million with the aim of restoring debt sustainability and macroeconomic stability. It is our expectation that the size of this year’s arrangement if approved will be between USD 1.5 billion to USD 2.5 billion, given Ghana’s increased Quota (SDR) and financing needs.

The news should come as a big relief to investors who over the past year have been worried about the looming debt distress in Ghana. We are of the opinion that an IMF arrangement was the only viable option for the government of Ghana, at least in the short run given the trajectory of external and overall public debt. We formed this opinion after carefully analysing the 2022 budget statement presented to parliament late last year. In our previous reports, we stressed that the government’s budgeted strategy of achieving debt sustainability (which centered around the E-levy) was ambitious and unrealistic.

An IMF program, if approved, offers the government of Ghana two important things – (1) Funding to finance the budget deficit and (2) The credibility essential for sound fiscal policies.

In recent years, the government of Ghana consistently tapped international capital markets not only to finance primary deficits but also to refinance previous debt obligations. For example, the government of Ghana issued a Eurobond series totalling USD 3 billion in March 2021 (with a weighted average maturity of 11 years at 8%) to contain interest costs and rollover existing external debt. By the end of the first half of 2022, however, the government had not been able to issue any Eurobond. We expect access to international markets to remain constrained in the near term. A concessionary loan (of about USD 2 billion) may go a long way to fill the gap created by the lack of access to international capital markets. It will also improve the deteriorating stock of Gross International Reserves. The Bank of Ghana reports international reserves at the end of April 2022 was USD 8.3 billion, equivalent to 3.7 months of import cover from USD 9.6 billion at end-December 2021, equivalent to 4.3 months for imports of goods and services.

Credibility in a marketplace is not overrated. Recent events including a series of downgrades from credit rating agencies have dented the government of Ghana’s ability to anchor expectations around set fiscal targets. By committing to an IMF program, the government can gain fiscal credibility and build a reputation over time to establish a strong track record of meeting its announced objectives.

A recent study by IMF staff shows that successful fiscal consolidation episodes – as measured by the decline in sovereign spreads (the difference between the interest rate on a US Treasury issue and a similar issue of another government) – have tended to be accompanied by IMF supported programs. In that regard, Fig 1 below shows that market participants responded favorably to the decision to commence formal engagement with IMF. We show in Fig 1 that there was a significant decrease in Ghana bond yields across all maturity following the announcement. 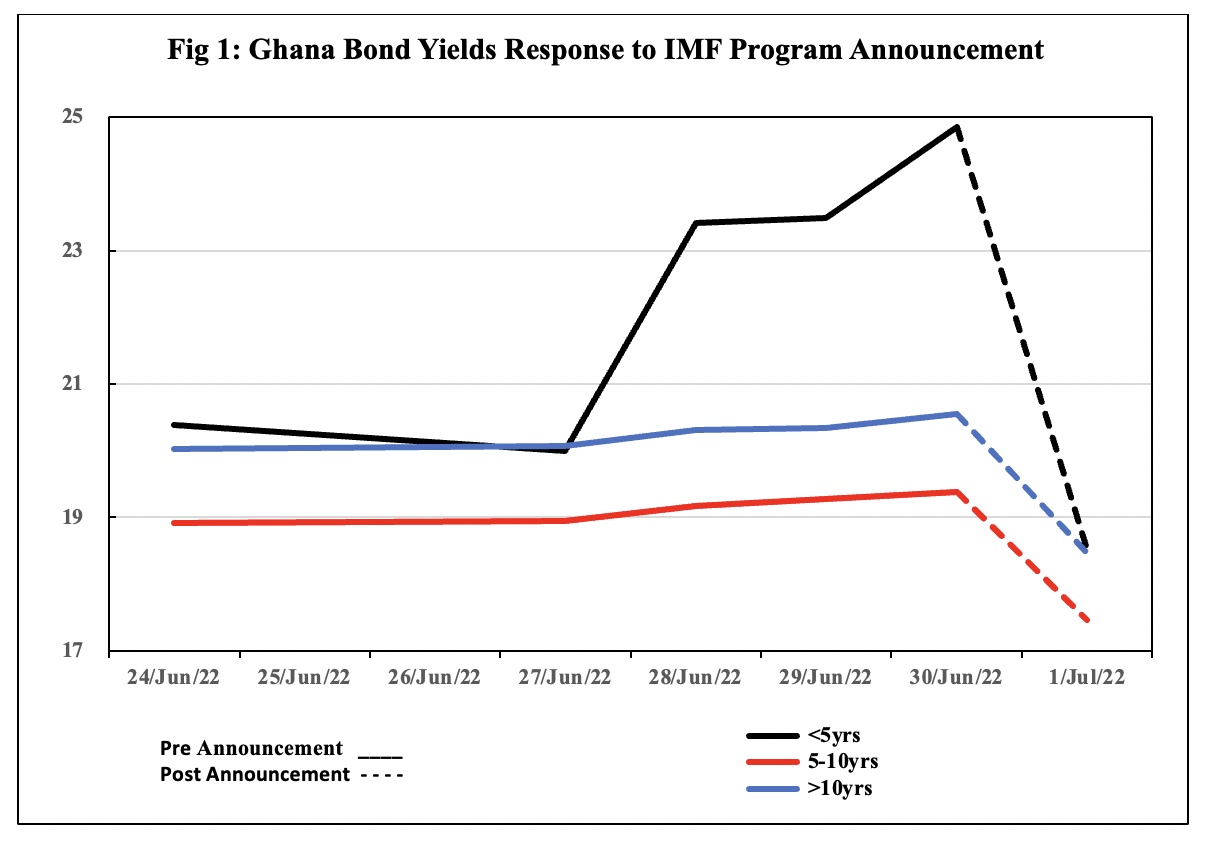 To conclude, we would say the program has the potential of buying the government of Ghana the needed time to fix the current fiscal challenges. We would keenly be monitoring the state of the Ghanaian economy especially heading towards 2026, when one of its major Eurobonds worth USD 1 billion, will mature. A successful IMF program will be one that at least facilitates Ghana’s return to the international capital markets by 2026.